On August 23, 2005, US Airways and America West unveiled the new color scheme for the merged airline. In a five city tour encompassing all three then-US Airways hubs (Philadelphia, Pittsburgh and Charlotte) and both then-America West hubs (Las Vegas and Phoenix), aircraft N109UW flew around the country with several employees in their previous carrier's uniforms. 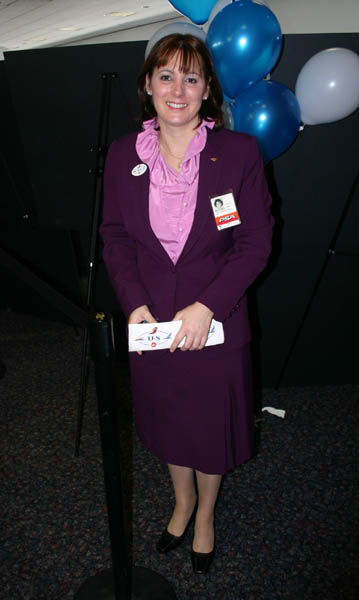 Wally Bohl shows off part of his extensive PSA collection on his agent uniform.

Also unveiled were artwork depicting the four "heritage" special schemes. As Doug Parker noted in his speech, "As we looked back at the history of US Airways we found employees that were very loyal to their original airlines." Four schemes are painted - America West, Allegheny, Piedmont, and of course...PSA. With smile.

(Concept art courtesy of America West Airlines and US Airways).

On every US Airways plane is the "Heritage Logo", featuring all four tail logos with the US from US Airways in the center. This logo will be placed next to the boarding door for all passengers to see. (Logo courtesy America West Airlines and US Airways).

Two former PSA employees pose for the camera at CLT gate B-2. Not photographed is Jan Anderson.

The PSA retrojet was dedicated March 30, 2006 in San Diego. Photos can be found here.